Nestled in a quiet glade in Indian Hill is a log house whose history bridges two centuries. The structure was moved to its current location in the 1970’s by former village residents. While log cabins were a common sight in the 1800’s, most have now been razed. The story of the log house evokes thoughts of America’s westward expansion. 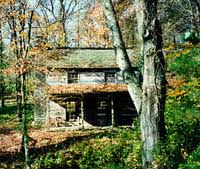 Routes to the West in the 1800’s included the National Road which bisects Ohio. One of the roads intersecting it, the “Three C Highway”, connected the towns of Cincinnati, Columbus, and Cleveland. Passengers secured seats in stagecoaches to travel to Ohio.  Since the overland journey took days, inns were established along the roughly graded road to accommodate overnight visitors. One coach passenger wrote: “There is no degree of comfort in traveling…the jolting over stones and through miry holes is excessively disagreeable, with the traveler’s head sometimes knocked against the roof with much violence.”

This log house was one such inn. It was originally located on the “Three C Highway” near Clarksville, Ohio. A local farmer disassembled the two-story way station, numbering each log, in the expectation of someday restoring the structure. When his plans changed, he advertised it one Sunday in the Cincinnati Enquirer’s Gold Chest column. An Indian Hill couple was interested, purchased it, moved the logs to Indian Hill, and consulted with an architect prior to the restoration.

Keeping the exterior architectural form intact, some changes were made. A loft and set of stairs were added. Originally the second floor had a separate outside entry – perhaps to accommodate sleeping guests while those below conversed and shared meals with fellow travelers. Heat was provided by woodstoves, and there is evidence today on some of the logs of a long-ago fire. Also added were a fireplace, a shed lean-to, a rustic front porch, and several windows.

The American log cabin has its own mythology, conjuring up images of pioneers in coonskin caps taming the Ohio wilderness with hard labor and a few hand tools. The process of constructing a log cabin was often a community affair, but could be done alone by a settler and his family. It was possible to construct a cabin with only one tool, the single bit axe. But, other valuable implements included the auger (for boring holes), adze and plane (for finish work), and maul and froe (for splitting shingles). The axe was used to fell the trees, hew them, square them up and notch them. After the logs were prepared, there was the work of raising, roofing and perpetual chinking. Local customs, the native wood at the site and the ability of the homeowners determined the character of cabins, but with hard work each became a unique work of art.

There is splitting and checking in the logs of the cabin. Its steeple notches and half dovetail corners show evidence of time’s passage. The chinking material (much improved since the 1800’s clay and wattle) still contrasts with weathered gray logs–a delight to the eye. Since its restoration the cabin has been used mostly as a guest house, and it is currently owned and protected by a private trust. Its dignity, the artistry of its simple form, and its historic merit are reminders of a vanished era.