The center section of this Greek Revival farmhouse was the original portion built about 1845.  With the exception of the brick steps and porch hood, the old portion retained its original integrity.  It was one of the  few homes built by the Buckingham family, significant landowners in the central portion of Symmes Township.  The 1847 published Atlas Map of Hamilton County lists the owner of this property as A. Buckingham.

After scouting the area in 1777 Levi Buckingham and his brother Enoch returned to the Ohio territory in 1790.  In 1794 Levi bought 1100 acres in the area now known as Camp Dennison.  Buckingham descendants lived nearby for generations. This house was razed in 2003. 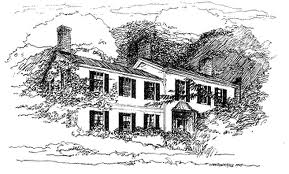