Camp Jim B and the Boy Scouts

The Boy Scouts have been a presence in Indian Hill for over seventy years. This international movement, started in England in 1899, came to the USA in 1910. In 1944 former Indian Hill Ranger Jim Blankenship asked Fred Meyer, also a Ranger, and to be Scoutmaster for the seven boys in the original Troop 501. They met weekly at the Cincinnati Country Day School gymnasium; and Mr. Meyer, who worked the midnight shift at the Ranger Station, carpooled the boys to the meetings and drove them home before reporting for duty.

Fred Meyer led the boys in their activities and attainment of individual merit badges, ascending in rank according to the Boy Scout Manual. Funds were raised through paper drives and an annual white elephant sale, held at Stephan Field. Jim Blankenship helped procure rummage for the event, repairing broken lawnmowers and bicycles for the sale.

These funds were used to finance the Scouts’ favorite activity: camping. Every other month, packing their 3 or 4 tents, they camped at sites such as the Kroger Hills Preserve (behind Willow Hills Drive), Albers Woods (near the Little Red Schoolhouse), and the back acreage of the Hinkle home on Given Road. Once a year a longer trip took them to Kentucky, Michigan, and Canada. Former Scout Bob Patrick, the first Eagle Scout from Troop 501, recalls riding in the back of Jim Blankenship’s open pick-up truck all the way to Niagara Falls, Canada, where the troop pitched their tents on the front lawn of a tourist home. 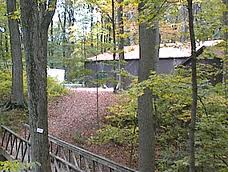 Envisioning a permanent home in the village for the fledgling troop, Jim Blankenship acquired and funded the purchase in 1950 of the 13 acres of land that became “Camp Jim B” (named in his honor) for $7000. A nonprofit corporation was formed, with the Trustees of the Indian Hill Rangers for a Board, later replaced in 1953 by the Scouts own Committee of Trustees. The original cabin at Camp Jim B was built by Scout fathers. A large meeting hall was added in 1966, funded by the sale of bird seed. Notable features include hardwood floors and a massive stone fireplace in the main room. Later renovations included storage areas, four patrol rooms, and conference room. W. Webb Hill, Jr., a life member of the Boy Scouts, organized the transfer of Camp Jim B’s real estate to the Green Areas of Indian Hill Village in 1981, which benefited the troops’ finances. In the late 1950’s there were 3 troops and one Explorer post. The three troops merged in 1986 to form one: Troop 502; and leadership and finances were consolidated.

“Jim B” is a unique camp, situated in an isolated grove of mature sycamore and beech trees, off Shawnee Run Road, with a creek running through the property. Here the Scouts meet weekly, following the goals developed years ago: character development, citizenship training, personal fitness and shared camaraderie. The motto “Be Prepared” and the slogan “Do a good turn daily” still guide Village Boy Scouts. A salute to the pioneers of this movement and all former and current Boy Scouts and Scoutmasters!

For more information regarding Troop 502, contact Scoutmaster Gary Banfield at 608-4330