Three of the township schoolhouses built in the nineteenth century were named for great Americans:  Jefferson, Franklin, and Washington.  These typical “little red schoolhouses” replaced their one-room log predecessors and were built from local bricks.  Town meetings, social gatherings and local festivities were also held at the schoolhouses.  They remain in Indian Hill today, each still serving the community in its own special way.

The Jefferson School (1851) originally had the door where the front center window is in the picture.  The rear ell, added sometime prior to 1900, made it a two-room schoolhouse, dividing grades first through fourth and fifth through ninth.  An addition on the right side in 1920 doubled its size, but by the 1940’s, increased enrollment exhausted its possibilities as a school.  Jefferson School now is known as the Jefferson Center, housing the offices and small meeting rooms of the Armstrong Chapel Church. 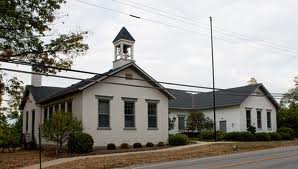