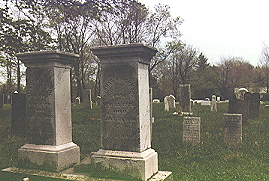 The graveyard behind Old Armstrong Chapel at the intersection of Drake and Indian Hill Roads is a key to the history of the village, and a reminder of the heritage of the Methodists.

Nathaniel Armstrong, an early pioneer for whom the chapel, cemetery, and church are named, established this part of the village landscape.  When his wife Hannah died, she was interred on the 300 acre family farm.  A few years later, in 1830, Nathaniel deeded “127 poles strict measure” to provide “a meeting ground or place of worship.”

The cemetery’s gravestones have stories to tell.  Some document the hard times of early settlers and their premature deaths.  The oldest recorded burial (1807) in the yard is that of Hannah Labertew, age 23.  There are at least 23 Armstrongs in the graveyard; not surprising considering that patriarch Nathaniel had 6 sons and 3 daughters.  Generations of other Indian Hill families are buried here, some of whom are commemorated by our local roads – DeMar, Kugler, Keller, and Muchmore. 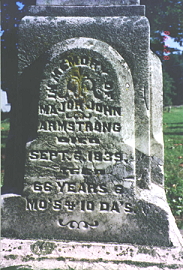 Time has not been kind to the older sandstone/limestone markers, and acid rain has deteriorated the engravings. Eroded or encrusted with lichen, some are undecipherable due to age, weathering or vandalism.  Still, the place gives a sense of both the passage of time and the emotion of loss.

Armstrong Cemetery is a museum without walls.  Echoes of individual lives are recorded on the stones.  The Howard family had 4 markers: Phebe, age 2; Rhoda, 1 year 9 months old; Sally, the mother, who died in 1833; and George, the father who died five years later at age 48.  Alexander Barns deeply mourned his wife, Alassana, whose poetic epitaph begins “Since coldness wraps this mortal clay…”  Many 19th century gravestones have symbolic carvings–weeping willow, an outstretched hand, or a delicate flower–folk art of that era. The prominent tall stone pyramid visible from Indian Hill Rd. memorializes the Rothenhoefer son who died at 8 months old.  This marker is unusual in contrast to the small ones for many other infants.

South of the traditional tombstones of the old section of Armstrong Cemetery is the new burial section, with markers flush with the ground, and a columbarium with niches for cremains.  The south central area is known as the burial spot for many World War I influenza victims interred in unmarked graves.

At the turn of the century, Decoration Day (now named Memorial Day) was observed by the whole community.  Village residents, including children, paraded from Jefferson School to Armstrong Cemetery led by the Indian Hill Band.  Flowers were placed on the graves, and soldiers from the Revolutionary War forward were honored with American flags.  Nowadays, that tradition continues each May with an ecumenical prayer service, a speech by the Mayor, a reading of the Gettysburg Address by a local Boy Scout, and recognition of attending veterans.

The quaint Armstrong Cemetery contains historic pieces of our past, and this island of tree-shaded tombstones remains a place of rest for deceased Village residents and a quiet sanctuary for the living of Indian Hill.