In 1938, this medieval-looking water tower was built on nine acres of land to supply water to Madisonville and portions of Indian Hill. It was funded by the City of Cincinnati with Public Works Administration labor. In 1948, the Ohio Supreme Court ruled that the City of Cincinnati was not required to provide water to Indian Hill since it was not a part of the city. The Village of Indian Hill purchased the tower and existing mains from the City of Cincinnati. The water system has been enlarged several times, but this tower remains the only elevated water source for Indian Hill, Terrace Park and Madeira. There is also a three million gallon underground storage facility at the Water Tower site. This picturesque structure has been designated an American Water Landmark by the American Water Works Association. 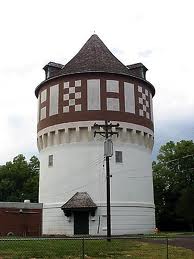