Since its construction in the mid-1820’s, this stone structure has served the surrounding community in several different guises. It was used as a church until the early 1870’s; then, after a second story was added, it was operated by Conrad Zurwelle as a mill for grinding wheat and corn. During the 1890’s it became a residence, and in this century was converted into a barn.

In 1992, The Greenacres Foundation began using this renovated church/mill/house as a classroom for the many school age children who visit this large farm. 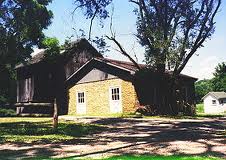