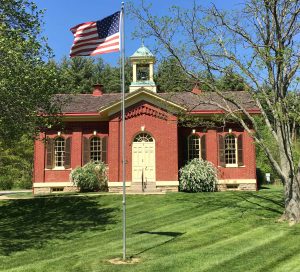 This graceful building was built in 1873-74 as the Washington Heights School.  Schoolmaster Charles Earhart taught the first class of 52, composed of students of all grade levels.  Later known as the Washington School, it remained in continuous use as a one-room school until 1940.  It is listed on the National Register of Historic Places.

The structure is made of local brick, probably from nearby Madeira, with masonry detailing unusual for a schoolhouse.  Its belfry houses a 200-pound bell, which can still be rung today.  Double front doors open into a vestibule; and the schoolroom has hardwood floors, walls of wainscoting and plaster, and a large expanse of blackboard.  Its high ceiling, ten large arched windows, and ventilation system make this an outstanding example of one-room schoolhouse achitecture of the 19th century.

In September of 1873, Josephine and Ambrose Buckingham sold the land this building stands on to the school board for the construction of an improved building for the education of local children.  Prior to that time, local children attended school in a small one-room log cabin diagonally opposite the present location of the Washington School.

The building ceased being a schoolhouse with the passage of the Ohio School Foundation Act, whereby many small schools were organized into larger districts, to promote development of a more efficiently organized school district.  Then with the incorporation of Indian Hill in 1941, the Washington School served as the administrative offices of the new Village. When the new Administration Building at Drake and Shawnee Run Roads was completed in 1956, the schoolhouse fell vacant, with only occasional use as a community building.  Then from 1961 to 1972, it served as offices for the Board of Education.

In 1973 the Village Council became concerned about the building’s future and invited interested residents (led by Tyler Emerson) to find a new use for the Schoolhouse.  Mrs. Emerson’s steering committee formed the Indian Hill Historical Museum Association.  The purpose of this Association was to locate, research, collect, and preserve memorabilia pertaining to the history of Indian Hill and its surrounding areas, to renovate the schoolhouse, and to develop it into a community historical center.

Now known as the Indian Hill Historical Society, this preservation group has grown into an organization of about 300+ families.  The Little Red Schoolhouse is the center for most of its activities, with monthly programs and board meetings being held there. The building is also available for meeting or party rentals.